The 2018 Mustang GT has the whole nine: a redesigned 5.0-liter V8, quicker response times for the 10-speed SelectShift transmission, and even custom-designed Michelin Pilot Sport 4 S tires in the Performance Pack. The new 5.0 registers 460 horsepower and 420 lb-ft. of torque, and hits 60 in less than four seconds in Drag Strip mode.

If there ever was an American performance car, this is it. And modern technology has taken nicely to the great pony car. However, the glory days stand tall, thanks to the work of author Donald Farr, who penned this recently-released wonderful gem we are featuring this weekend.

The new Mustang might be hot but these old Fords sure could stoke the fire.

The Complete Book of Classic Ford and Mercury Muscle Cars spans the Blue Oval’s catalog of classic machines from the early 1960s to 1973. Farr takes us through this prolific time, from the Fairlanes and Galaxies with their 390 bigblock V8s to the iconic Shelby and Boss Mustangs. We are able to dive deep into what was known as Ford’s Total Performance program, which subjected these cars to the rigors of drag strips, oval circuits, European rally events, road courses, and everything in-between.

Later we see the Mercury Cougar, Cyclone GT, and Spoiler. And the Cobra Jet looks as good as ever. 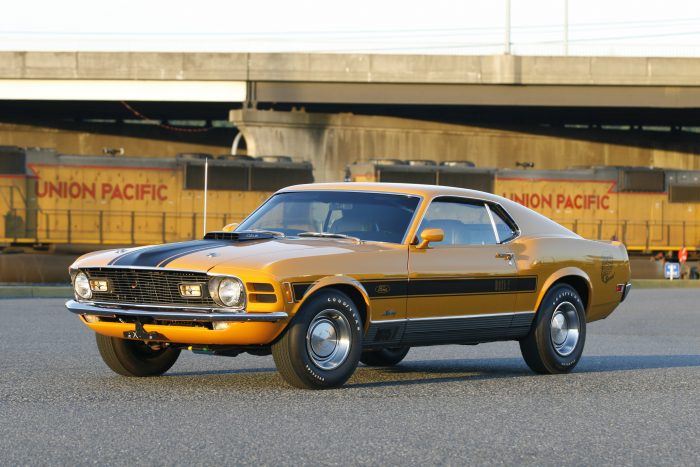 This beautiful 428 Cobra Jet is found on page 116. It continued as an option for the 1970 Mach 1, including a handful of Twister Specials built as a special Kansas promotion. They came with side decals in addition to the 1970 Mach 1’s aluminum rocker panel covers. Photo: Eric English.

Car enthusiasts – and especially Ford fans – will enjoy thumbing through this one. In my early years as a Ford sales consultant, I would have displayed this book on my desk at the dealership. We sold Mustangs, yes, but most of the cars we moved daily were the Focus and Fusion. Great cars for sure, but there’s something refreshing about a little extra horsepower and nostalgia, which The Complete Book of Classic Ford and Mercury Muscle Cars easily provides.

Farr has been with Mustang Monthly Magazine for 30 years. In addition to his magazine work, he authored Mustang Boss 302: Ford’s Trans-Am Ponycar and owns the 1966 Mustang GT his grandfather purchased new. He was inducted into the Mustang Hall of Fame in 2012, an honor well-deserved.

The Complete Book of Classic Ford and Mercury Muscle Cars: 1961-1973 is available though Amazon and Motorbooks.